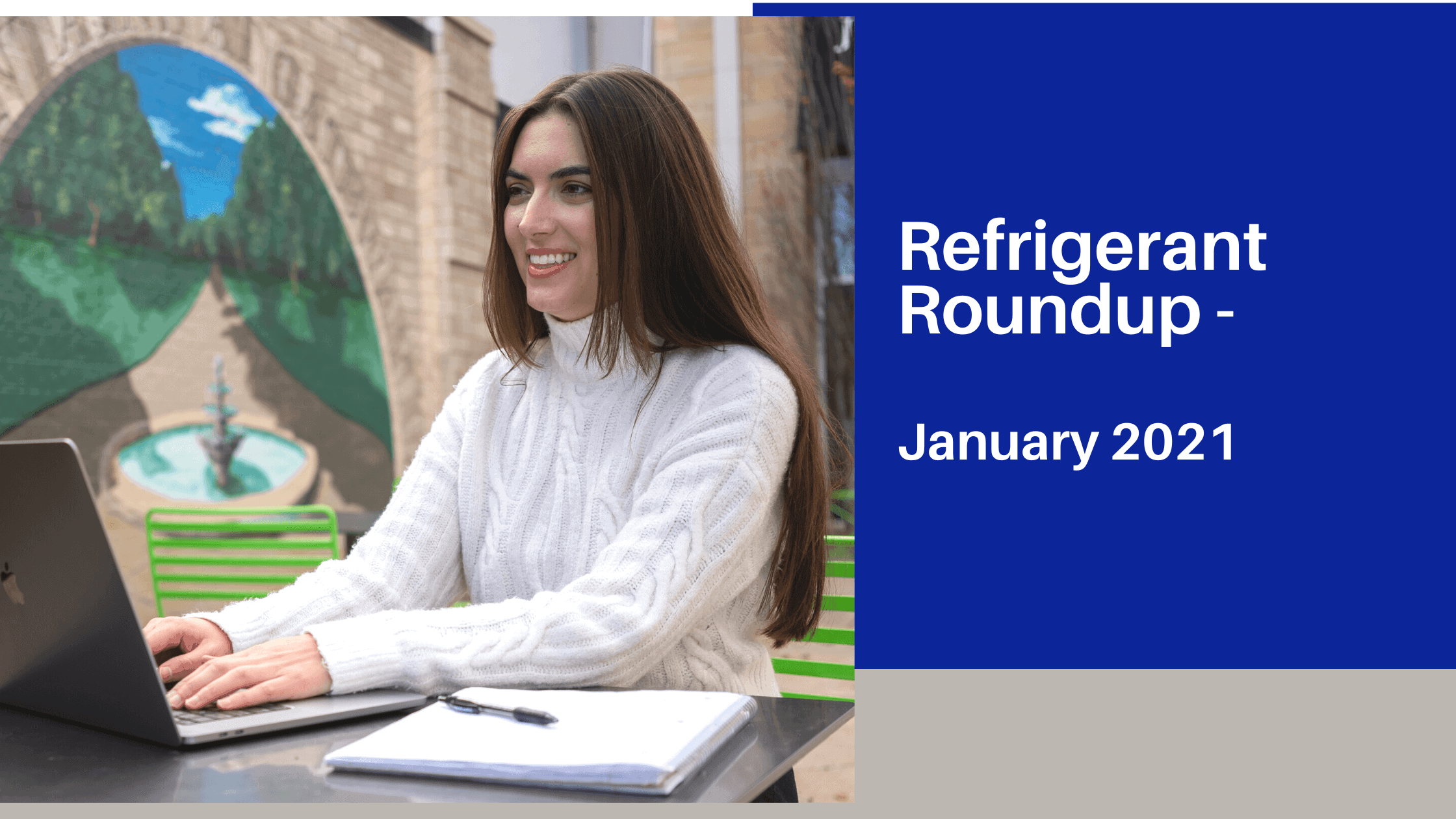 This article is a part of my Refrigerant Roundup series which appears monthly.

January 2021 contained numerous refrigerant updates that you should know about, including significant development on the forthcoming U.S. HFC phase down; Q4 EPA compliance violations that resulted in six-figure fines related to ammonia refrigeration safety; and more.

Refrigerant in the News

The American Manufacturing and Innovation (AIM) Act, a historic, bi-partisan environmental legislation was recently passed by Congress. (To give you an idea of just how bi-partisan this initiative was, both the National Association of Manufacturers (NAM) and U.S. Chamber of Commerce, along with the Natural Resources Defense Council (NRDC), supported this initiative.)

What does this legislation mean for the HVACR industry moving forward? Well, in essence, the Aim Act starts the much anticipated HFC phase down in the U.S. at the federal level. Prior to its passage, the HFC phase down was mostly managed at the state level.

Now, this federal legislation will phase down HFC refrigerants by 85% over the next 15 years. It’s also expected to create 33,000 new U.S. manufacturing jobs as well as sustain 138,400 jobs over the next seven years and improve the U.S. trade balance in equipment and chemicals by $12.5 billion.

Thus, this landmark legislation will increase domestic production of refrigerants and help position the U.S. as a leader in low-GWP technology and climate-friendly HFC alternatives.

The EHS Daily Advisor reported that in the fourth quarter (Q4), the U.S. EPA took enforcement actions that “resulted in $4,582,755 in fines.”

Among such enforcement actions included a company that had to pay a six-figure civil penalty because it did not adequately manage compliance risks and meet requirements for an industrial refrigeration system that used anhydrous ammonia.

Several violations were found during EPA inspections. Such violations included failure to meet the following:

The major takeaway from this story is that the EPA continues to crackdown on ammonia refrigeration safety violations, which leads me to my next story in this roundup:

Along similar lines, just under two weeks ago, on Jan. 27, 2021, the U.S. EPA published a news release from its Region 7 (Midwest) that announced it had reached a settlement with a cold storage company “to resolve alleged violations of federal Clean Air Act Risk Management Program regulations” at several of the company’s refrigeration storage and processing facilities.

When the EPA inspected these regulated facilities, each of them “contained over 10,000 pounds of anhydrous ammonia,” which made them subject to Risk Management Program (RMP) regulations.

In fact, facilities that have over 500 pounds of ammonia must complete their annual Tier II reports by March 1st ?, which is just around the corner.

For instance, FacilitiesNet featured an article “4 Strategies for Advanced Air Filtration,” which provides a quick overview of filtration-enhancement options that facility owners and managers may consider “before, beyond, and in addition to an HVAC upgrade.”

Well, that concludes the Refrigerant Roundup for January 2021. Thanks for reading!